When Emirati artist and sculptor Mattar bin Lahej received the call to design the exterior facade of the Museum of the Future, he knew it was the moment he had been waiting for his entire career.

For nearly four decades, bin Lahej has established himself as a multi-faceted artist, fusing Arabic calligraphy and sculpture to produce iconic pieces that defy the conventional.

“I had developed my artistic awareness over the years, which made it easier for me to accept the difficult task. The projects I had undertaken as an artist gradually brought me to the Museum of the Future with the idea of ​​creativity and the ability to build,” said ben Lahej. Khaleej times as it sprang from this globally acclaimed landmark, which was widely recognized for its calligraphy-wrapped facade even before the historic opening on February 22, 2022. 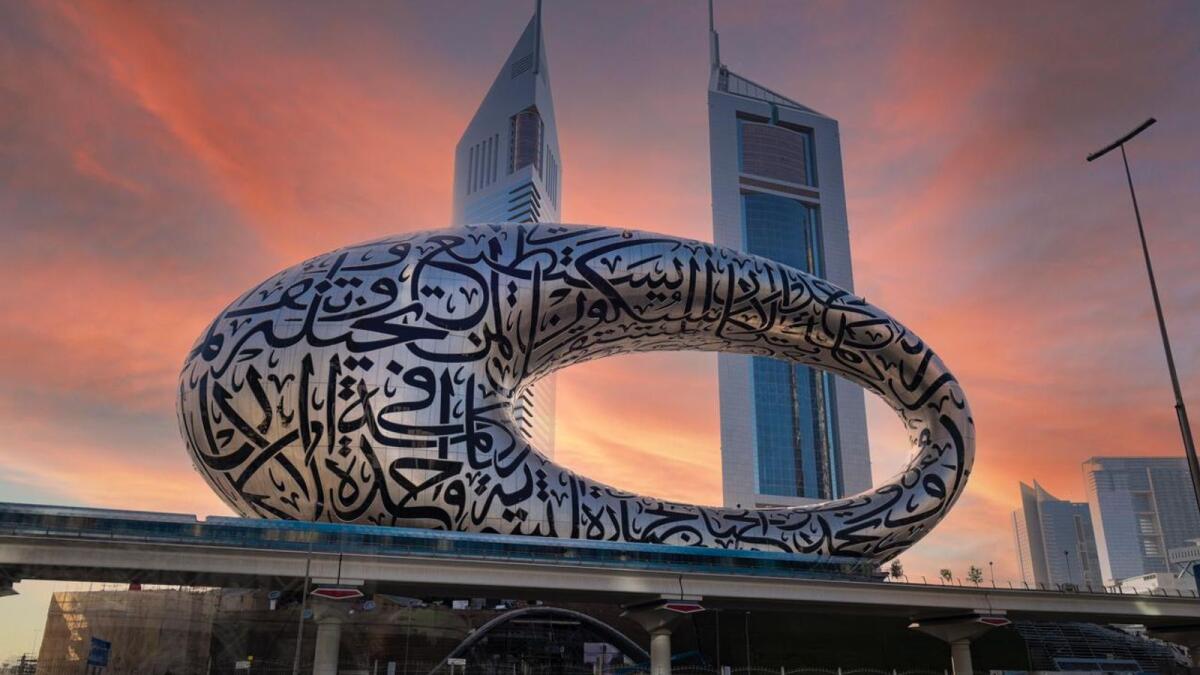 The self-taught artist approached the project with certain data. He knew there was no better than a language-based design to display the authenticity of Arabic heritage on a global landmark.

The sculpted strokes of classical Thuluth script were his choice to encapsulate the aesthetics of the Arabic language in the future.

“I merged the Arabic letter and the legacy into a time capsule that is the Museum of the Future. This architectural monument will carry the Arab heritage through different periods,” bin Lahej said.

Laying out the 3D design on a paper was the hardest part for bin Lahej, especially when the calligraphy had to be carved across 14,000 meters of a torus-shaped stainless steel and glass facade at a business. unique of its kind in the world.

With exterior calligraphy piercing through the museum’s interior walls and ceiling, bin Lahej said the design needed to merge the aesthetic elements with the technical aspect with a high level of precision. 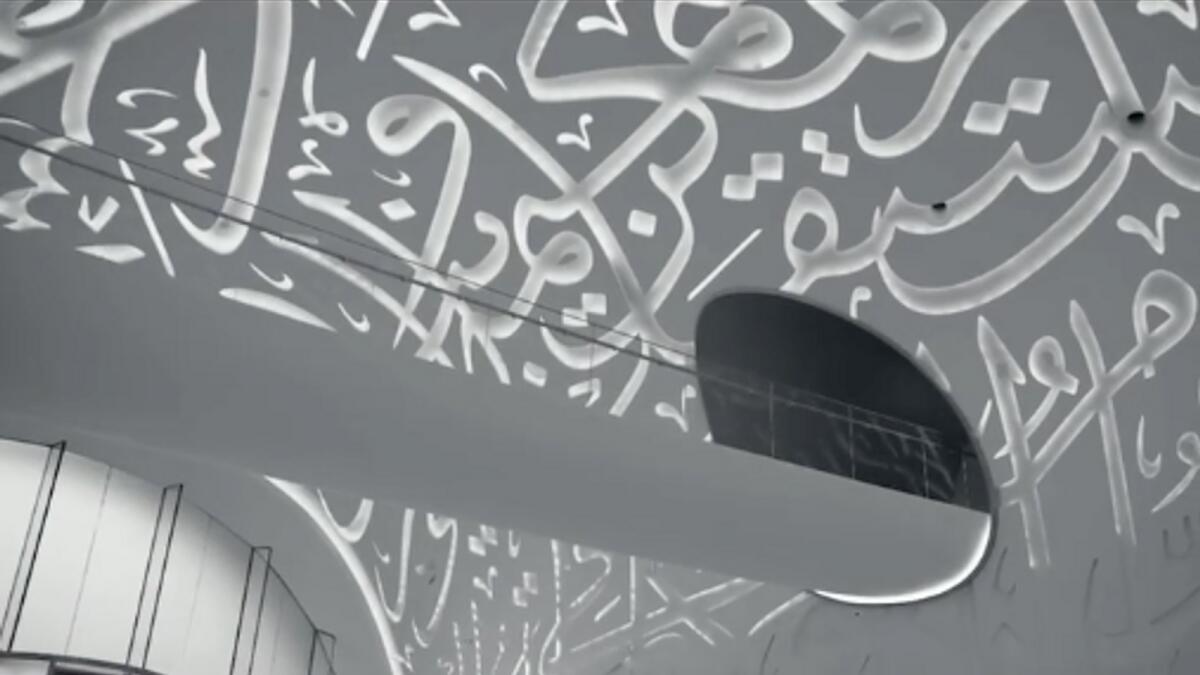 Indeed, this multi-layered approach to design required a holistic artistic approach and perspective. This is where bin Lahej’s background in engineering and real estate, combined with calligraphy and sculpture, came in handy.

“I had to study the building from the inside to design a structure where engineering and art intertwine.”

He added that the design “had to take into account several architectural elements such as electrical connections, LED lights and the overall targeted and environmentally friendly construction”.

The outline of the Arabic script would serve as the museum windows that would throw natural light into the museum during the day and illuminate with stunning LED lights at night. 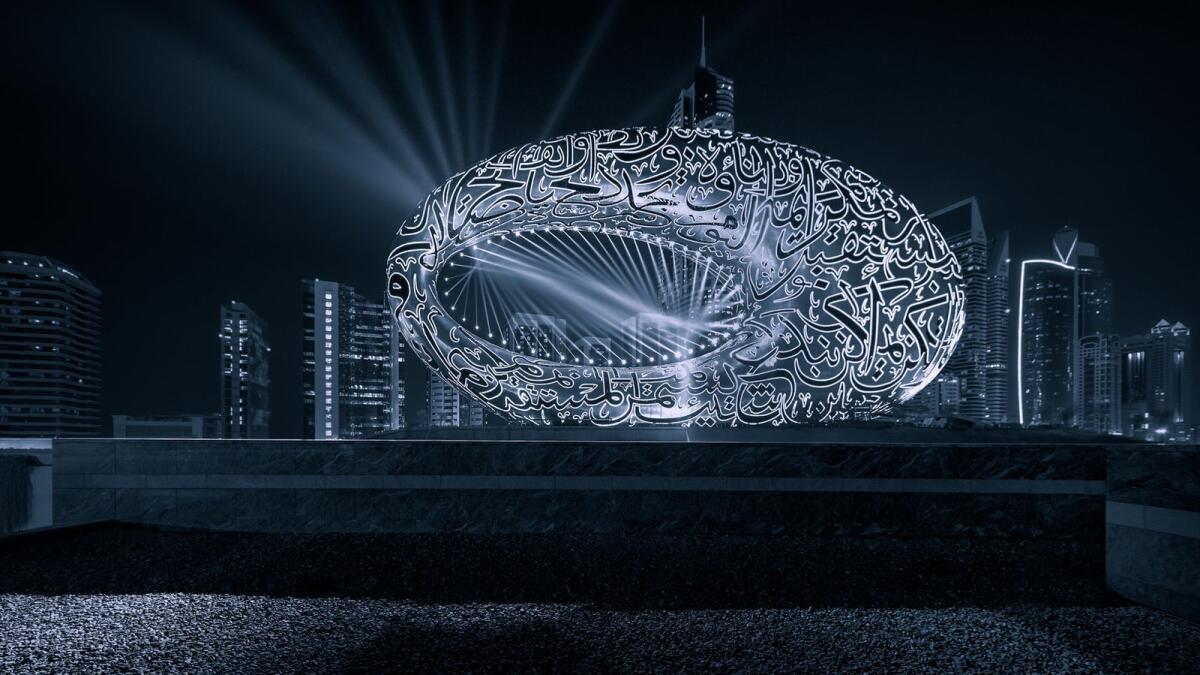 “The design had to strike a balance between ‘solar heat gain’ and air conditioning without compromising architectural aesthetics,” bin Lahej revealed.

Beginning the design process in 2015, bin Lahej said it took four months – in a back-and-forth process – with architecture firm Killa Design to finalize the calligraphy after taking into account artistic considerations. and techniques.

Another level of challenge was selecting the text that would go on the facade’s 1,024 robot-made steel panels. Bin Lahej knew the script had to revolve around the future.

He also knew that the text should be selected so that the strokes of the phrases merge and flow seamlessly across the facade.

And when it comes to the future, there is no better advocate than His Highness Sheikh Mohammed bin Rashid Al Maktoum, Vice President and Prime Minister of the United Arab Emirates and Ruler of Dubai.

Filtering through 14 future-focused quotes, the options selected with the Dubai Future Foundation team and approved by Sheikh Mohammed himself were shortlisted to three: 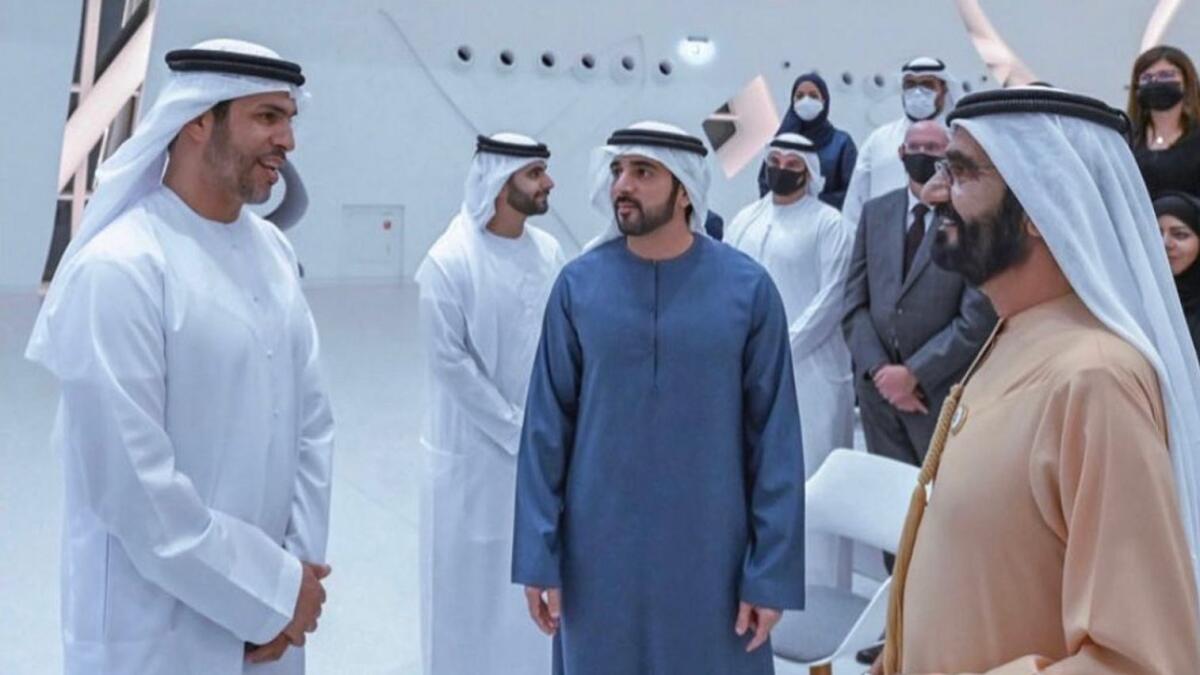 Bin Lahej found the quotes to be the perfect blend that captures the museum’s mission as an impetus to Dubai’s high-speed journey towards building a better future for humanity.

“Using classical calligraphy to convey the message of Dubai’s future is like how we look back with pride on our past, while setting our eyes on the future. It reflects the vision of Dubai that stands the test of time.

Bin Lahej urged the people of the UAE to spread the message of the iconic structure in their various professions – be it medicine, tourism, culture, finance or economics.

“The museum is a time machine and a symbol of all that is changing. It tells us to challenge ourselves to be better, so let’s seize the opportunity to be in a country that offers us a fertile environment to grow.

Beyond the “Museum of the Future”

Driven by challenges and accomplishments, ben Lahej said working on this iconic landmark has inspired bigger leaps in his career. “Before, if I looked a step ahead in the past, now I look 60 or 70 steps ahead.”

With works on display in the UK, US and throughout the GCC, bin Lahej said his passion lies in producing expressive art in public spaces, not confined to the walls of a museum or museum. ‘a gallery.

Today, he is leaving his mark on Arabic calligraphy with his new “Mattar Font” which features a more abstract form of Arabic letters. 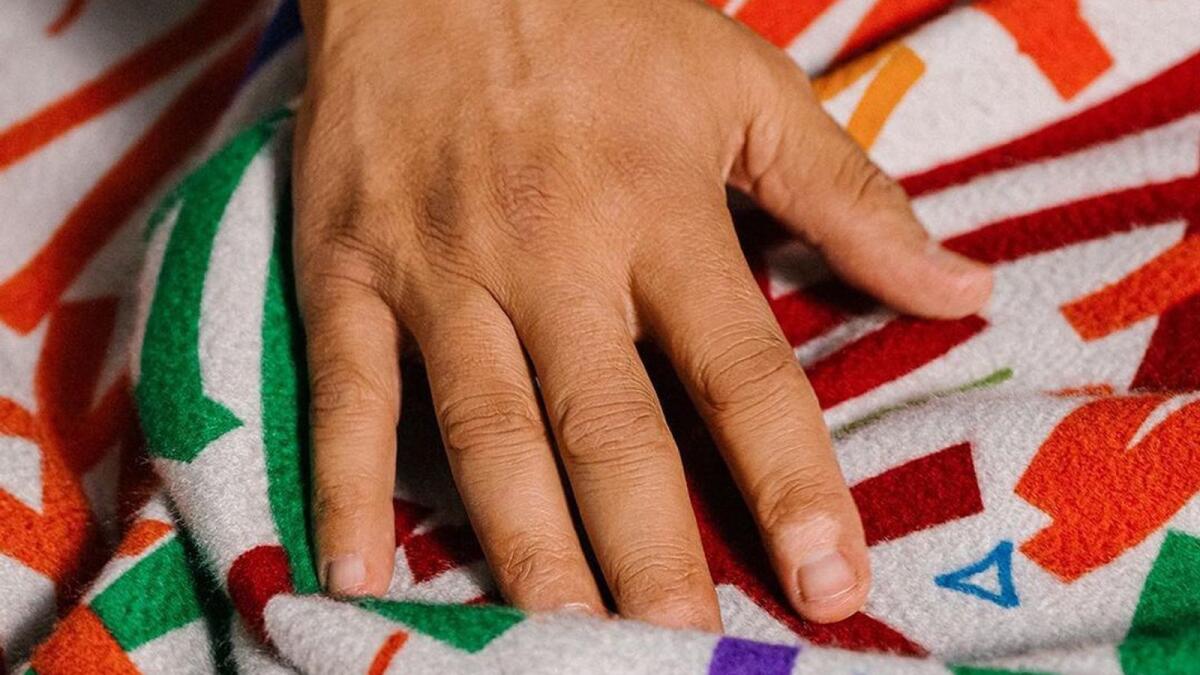 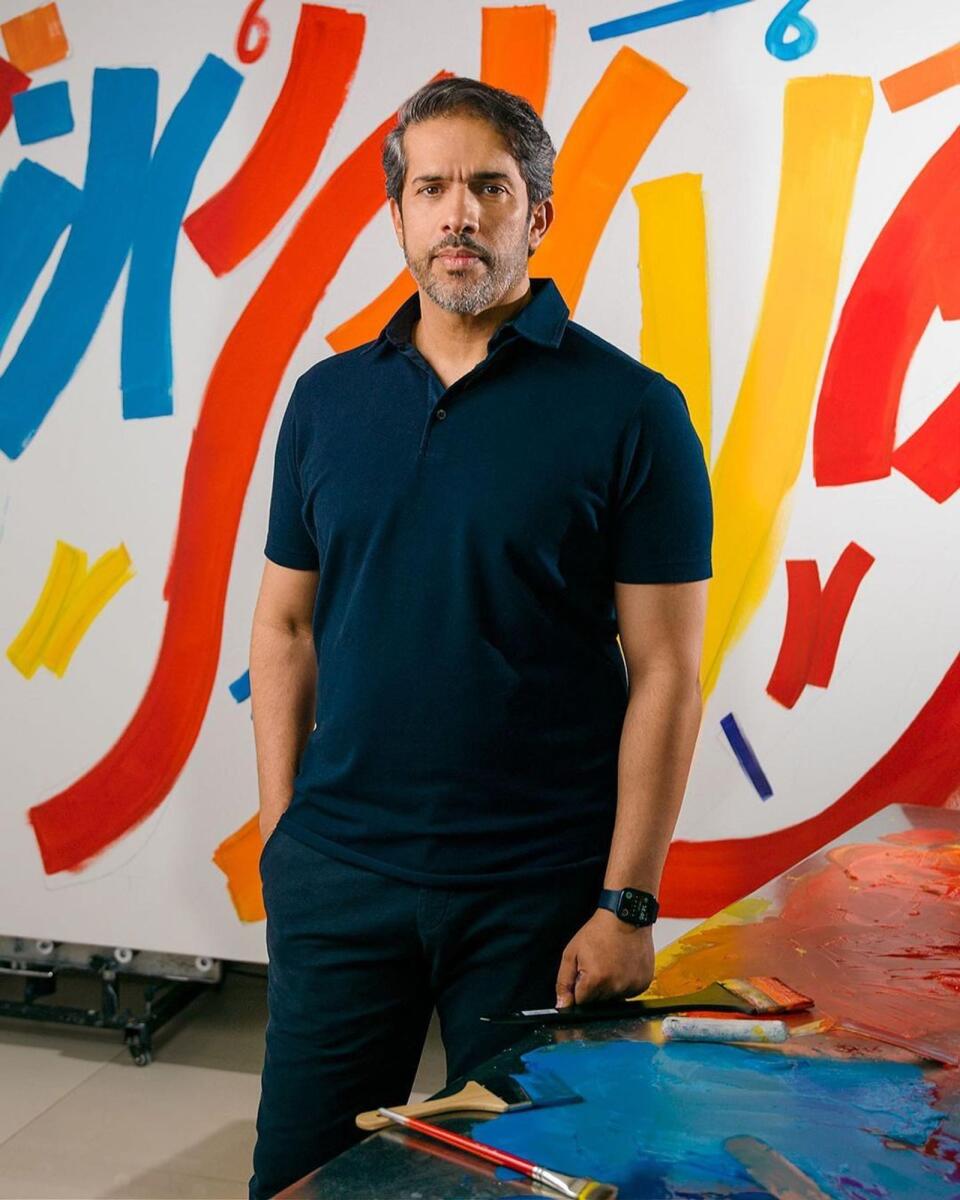 Aiming to establish himself as a Renaissance artist, he takes his work to new frontiers. One such unique undertaking is its collaboration with Italian clothing company Loro Piana to print its “Mattar Font” on a series of cashmere throws.

He is also currently in talks with other global companies and brands for larger projects, some of which are outside the UAE.

Bin Lahej’s presumed duty to the younger generation is far from being overlooked. As well as reaching out to the local artist community through his Mattar bin Lahej gallery, the father of six is ​​launching an online training program to connect young talent with their idols on the pitch.

“Challenges inspire achievement, because overcoming the ‘difficult’ yields impressive results. If you don’t push your own limits or look beyond the conventional, you will remain stagnant.

The Courtship began with 16 suitors competing to be Nicole Remy’s true love. Derek Kesseler went from Big Brother Canada to the Regency-themed show. Showbiz Cheat Sheet had a phone interview with him on March 15, and he revealed details about the reality TV show that fans haven’t seen. [Warning: This article contains spoilers for […]

Faisal Mosque: National Treasure in Pakistan designed by a Turk

Nestled at the foot of the Margalla Hills, the Faisal Mosque is one of the most massive and essential structures in Pakistan’s capital, Islamabad. Named after its benefactor Faisal bin Abdulaziz Al Saud, the mosque is Pakistan’s largest and one of the country’s most popular and important tourist attractions. Saudi King Faisal allocated a colossal […]